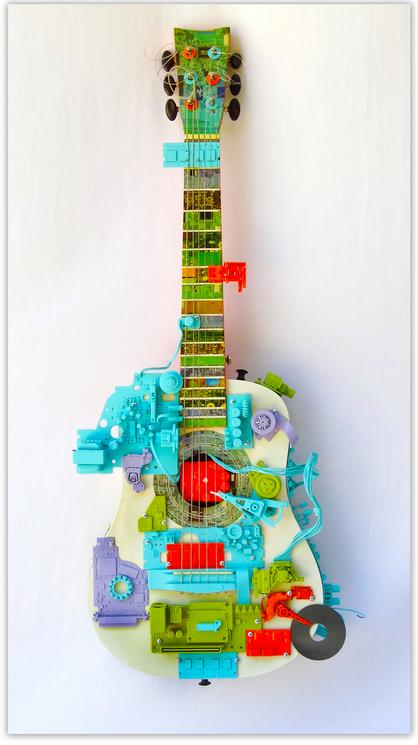 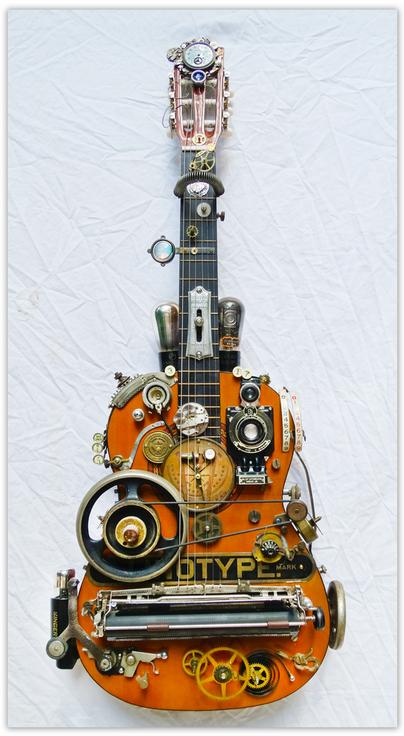 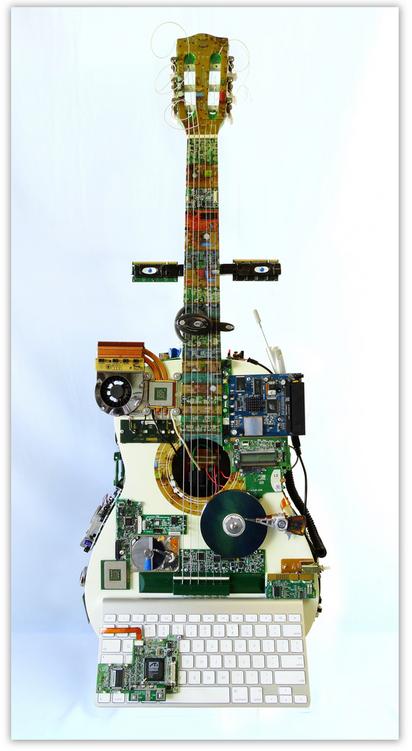 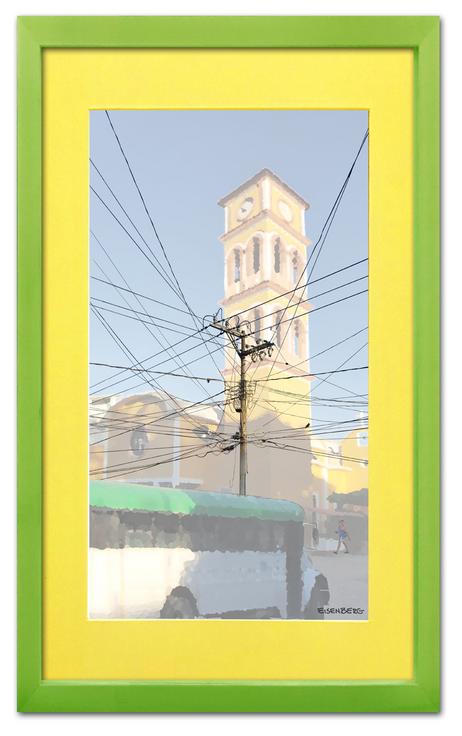 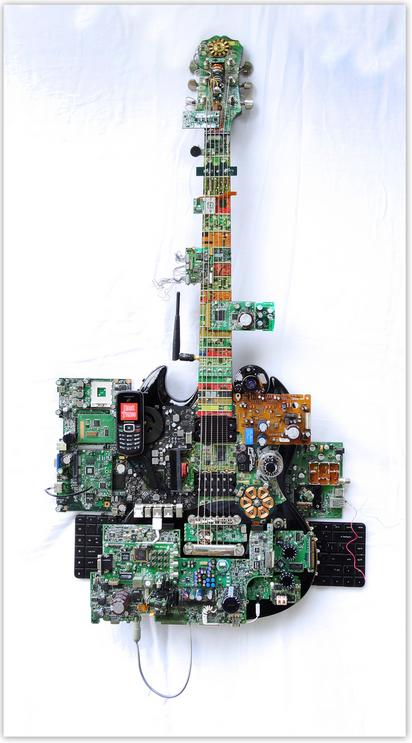 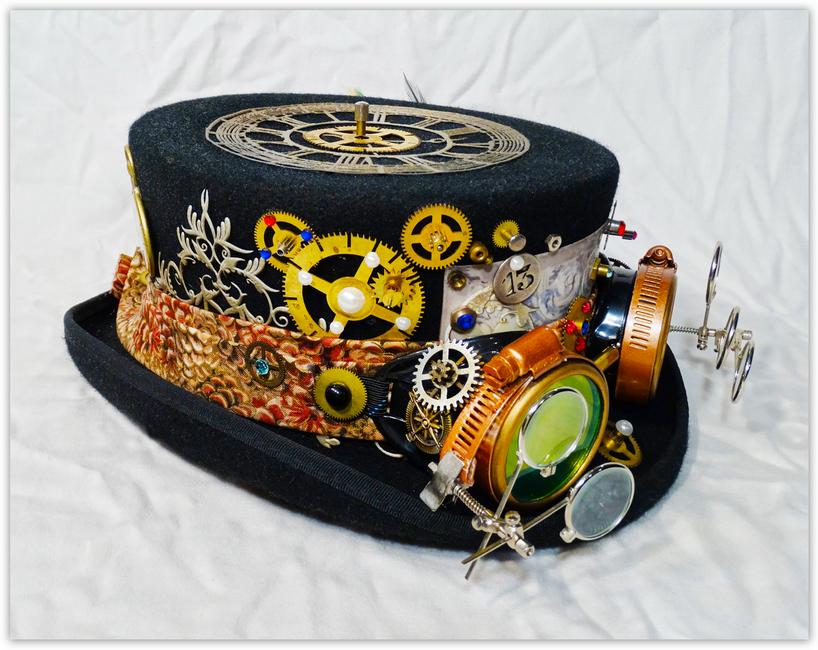 Assemblage is an artistic form or medium usually created on a defined substrate that consists of three-dimensional elements projecting out of or from the substrate. It is similar to collage, a two-dimensional medium. It is part of the visual arts, and it typically uses found objects, but is not limited to these materials.
My assemblages explore the possibilities of combining worlds, saving lives and changing intentions. Upcycling the old and giving new beautiful life.
The curving shape and sensual beauty of a brass horn still exists even after it falls from the stage. The well-worn guitar retains its grace long after the earthly life of the instrument. The instrument is resurrected with an infusion of love of an artist and the logic of nuts and bolts and gears and circuit boards.
Guns receive a transformation with a dressing of technology—both old and new. In essence, turning swords into plowshares—changing destruction into beauty.
There is no end of life for the broken and bruised. The resulting assemblages tell stories and represent unique new personalities, well-equipped to embrace a new future.

I started with the computer components but soon discovered that everyone was drawn to my Steampunk musical instruments and the way cool gun collection.

Click on images to see categories. Instruments do not play, firearms are disabled.​ 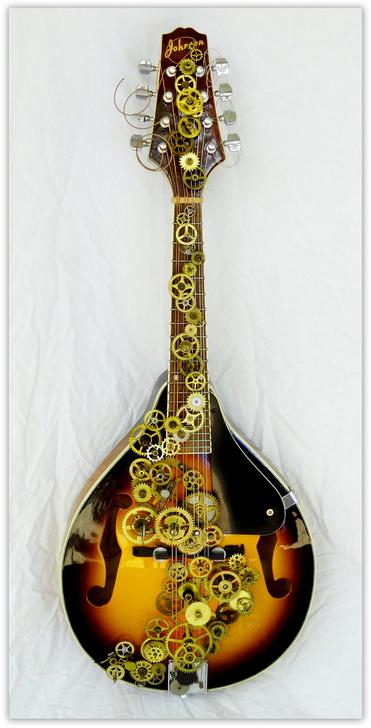 MARC EISENBERG
Born in Dallas, Texas
Education: Texas State Technical Institute – Amarillo; Associate Degree with Honors – Commercial Art
My professional career began when I took the position of Staff Artist at Texas State Technical Institute in Harlingen, Texas. From there I moved back to Amarillo and was the Staff Artist at our highly accredited Amarillo College. For the next four years I was in the communications department of the local electric utility, Southwestern Public Service Company, handling all the internal marketing and local advertising. I then decided to join Cambridge Advertising as Art Director, creating advertising for the local McDonald’s franchise, auto dealers and hospitals. Next it was off to The SilverMark Group as Art Director. Their main concern was the health care industry, concentrating on retirement homes and the senior population. When that company relocated to Dallas, I chose to keep my family in Amarillo and went to work for Whitney Russell Printers giving me a wonderful opportunity to become my own AE, Art Director, Production Artist and Print Production Coordinator for the next 16 years.
When I moved to Corpus Christi and started my freelance business, I was working with clients such as Kailo Communications, Time Warner Cable, Texas Chiropractic Association and the Texas State Aquarium.
After moving to Austin, I went to work for the Austin Advertising Federation as Director of Operations, managing the day-to-day operations of the 1,500 member organization.
As a hobby project I turned a WWII Mauser rifle into a work of art using computer parts, circuit boards and crazy parts. Remembering I had two old trombones in the attic, they were next to receive new life as works of art. What started as a hobby project has become a passion for me with over 72 works of art created.
My background has been on the creative side – heavy in concept, design and print and now as an assemblage artist. I'm also pretty darned good with bar-b-que pork ribs. 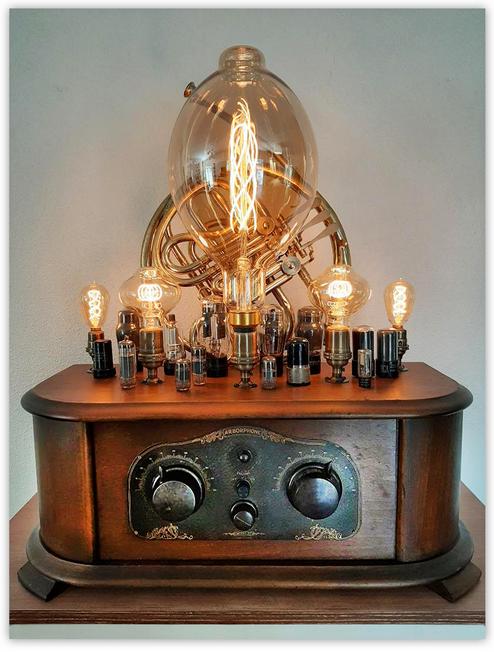 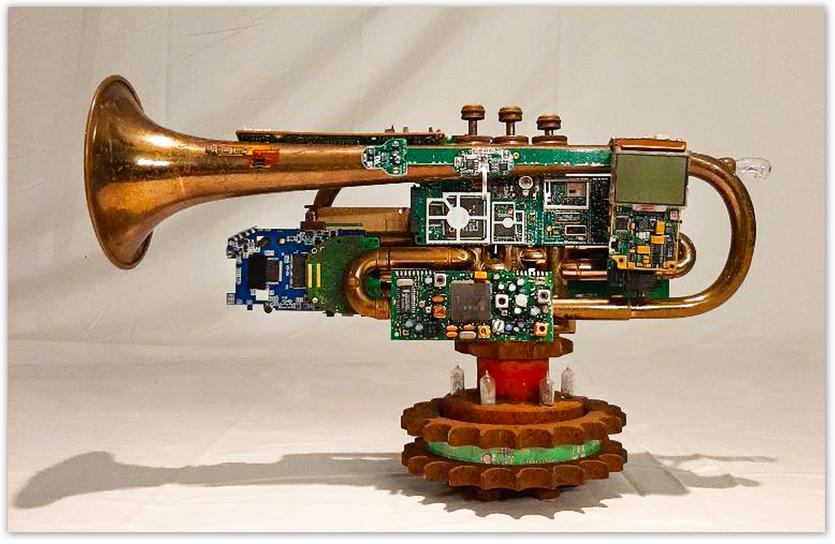 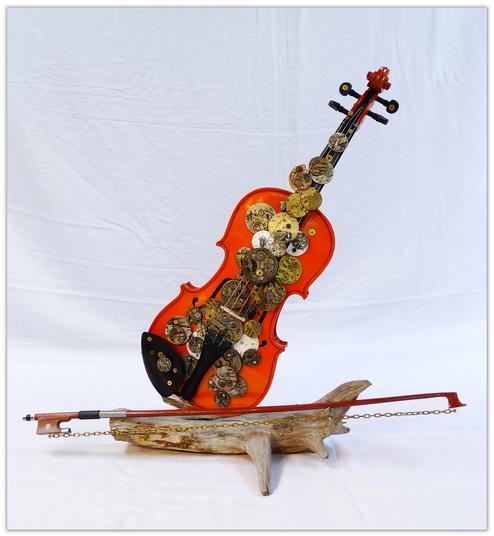